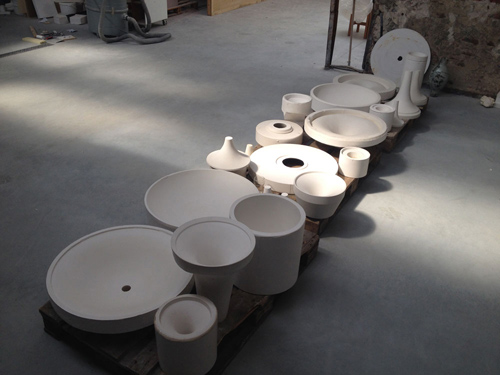 In 1995 he received a scholarship from the Ministry of Foreign Affairs in Rome to study at the Royal Academy of Fine Arts in The Hague. In 1998 he completed his studies at the department of sculpture.

With his work Pierluigi Pompei confronts space, where architectural elements and sound form the main parts. The infinite and the immeasurable, frontiers, barriers and spaces that are not directly noticed, constitute the starting point. To define our physical, social and psychological position in the world, boarders are needed; so much literal as figurative.

With his work Pompei searches into the precise definition of space, for himself as well as for the spectator, using different materials and techniques.

In 2006 he worked for three months as an artist in residence at the European Ceramic Work Centre in Den Bosch sundaymorning@ekwc). During this working period he acquainted himself well with the ceramic material and there the horn series originated. In his quest for the most effective acoustic shape that projects sound, he came upon a logarithmic curve. This curve resembles the shape of a trumpet.

From 1994 he shows his works in galleries, museums and cultural manifestations in Holland, Italy, Germany, France, Poland, Switzerland and outside Europe. Pompei receives commissions on a regular basis and makes, in commission of the municipality of The Hague, the sculpture for the Culture price of that city, which is rewarded every two years.

From 2007 he teaches at the Design Academy in Eindhoven.

theme WordPress
Back to top